Ranked Choice Voting eliminates the “spoiler” problem that drives voters to support the “lesser evil” instead of their preferred candidate. It incentivizes candidates to court all voters and to look for common ground, instead of stoking division through fear-mongering and personal attacks. In runoff elections, it’s cheaper and increases voter turnout. It removes obstacles that keep ordinary people from running for office. By opening elections to a diversity of candidates and viewpoints, Ranked Choice Voting can replace partisan warfare with popular consensus.

Our current electoral system is “winner take all,” meaning that a vote for candidate B is a vote against candidate A. This creates a “zero-sum game” in which candidates are incentivized to smear their opponents as worse than themselves. It doesn’t matter if voters despise a given candidate, as long as they hate their opponent even more. (Think of the 2016 presidential election.) In this context, running attack ads makes strategic sense even if they make the attacking-candidate airing them look sleazy, so long as they make the target-candidate look even worse. In the words of Ricky Bobby, “If you’re not first, you’re last.” By contrast, Ranked Choice Voting incentivizes candidates to try to appeal to every voter group, because there’s value in being a voter’s second or third choice. This discourages candidates from running attack ads against opponents whose voters they may need, and encourages candidates to look for common ground instead of “wedge issues.” The data bears this out: a pair of Rutgers-Eagleton polls in 2013 and 2014 found that negative campaigning was significantly lower in cities with Ranked Choice Voting

Even in the 21st century, women are still dramatically under-represented in American politics, holding only about a quarter of elected offices. The current system of “winner take all” elections maintains this anti-woman bias by 1-favoring incumbents (who are mostly men), 2-making it expensive to run for office (which penalizes candidates with lower incomes and childcare responsibilities), and 3-promoting negative campaigning and “attack ads” (which statistically hurt female candidates more than male candidates, due to gender stereotypes). In contrast, Ranked Choice Voting reduces the unfair incumbent advantage, encourages community organizing and voter outreach over expensive ad campaigns, and encourages positive, issues-based campaign messages over character assassination and fear-mongering. In short, by opening elections to candidates outside the status quo, Ranked Choice Voting levels the playing field for traditionally under-represented groups, including women. This is borne-out by data: according to the advocacy group Represent Women, over the last decade in the 19 cities and counties that have used Ranked Choice Voting, about half of the winners are women.

Increases People of Color in Politics

Non-white people are dramatically under-represented in Delaware. As of 2018, the state General Assembly was 85.5 percent white, with just eight African American legislators and one Latino legislator. By comparison, only two out of three Delawareans are white, while one in five are African American and one in ten are Latino. In fact, “Delaware'' is another name for this area’s indigenous Lenni Lenape people, yet there was not a single indigenous American in the state legislature, nor any Asian or Pacific Islander lawmakers. Ranked Choice Voting can help fix this disparity: just as ranking the vote increases women in politics by reducing barriers for regular citizens to campaign, so too does it open the door for people of color. According to an analysis of 11 cities from 1995 to 2014, adopting Ranked Choice Voting increased the amount of candidates of color in a given election by nearly 50 percent.

Ensures Winner By Majority and Encourages political diversity by Eliminating “vote splitting,” aka “the spoiler effect.”

Independent voters outnumber both Democratic and Republican voters, yet the Republican and Democratic parties dominate electoral politics. Why is that? Well, in the current electoral system, candidates only need a plurality of votes to win--that is, more than any other candidate, even if that is less than a majority (i.e. more than 50 percent). In this “winner take all” or  “first past the post” system, a candidate can win while being deeply unpopular among most voters as long as the majority of voters who oppose them are split into voting for different candidates. This is the “spoiler effect” created by third-party candidates: for example, when a Green candidate runs against a Democrat or a Libertarian runs against a Republican, they risk splitting like-minded voters into different candidacies and thus helping “the other side” win. Under Ranked Choice Voting, by contrast, election winners have won a majority of votes by definition, because the election isn’t over until some candidate has a majority of votes. That’s the whole point of Ranked Choice Voting: if no candidate wins a majority, the least-popular candidate is eliminated, those ballots go to each voter’s next-favorite candidate, and the results are recalculated. In other words, Ranked Choice Voting elections are won by the most popular candidate, rather than the least unpopular candidate. At the same time, Ranked Choice Voting encourages ideological diversity by allowing third-party candidates to run without risking becoming “spoilers” who take away votes from a mainstream party candidate who holds views closer to their own.

Endorsed By Many Leaders

Ranked Choice Voting has been endorsed by political leaders across the spectrum, including both John McCain and Barack Obama (the two major-party nominees for US President in 2008). Third party candidates have endorsed it, including Libertarians Gary Johnson and Jo Jorgenson and Green Party candidates Jill Stein and Ralph Nadar. It is supported by Democratic candidates Bernie Sanders and Andrew Yang, by right-wing commentator Ben Shapiro, and by environmentalist Bill McKibbon. Eight winners of the Nobel Prize in Economics have endorsed it, as have the New York Times, the Washington Post, the Boston Globe and the Economist. You can see a longer list of Ranked Choice Voting endorsements here. 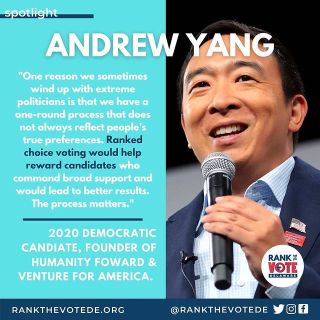 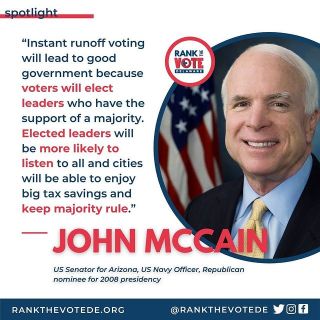 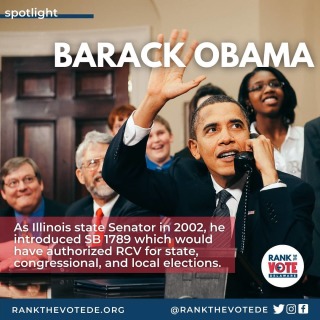 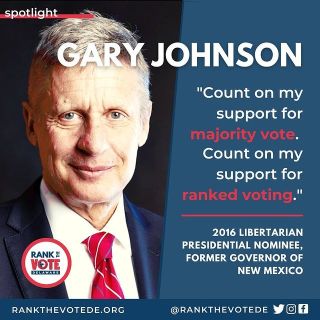