Ranked Choice Voting, or  (RCV), is a simple change to our current voting system that allows you to rank your candidates in the order of preference rather than just picking one. This means instead of just voting for the candidate you think can win, you can vote for the candidate you’d like to win. With RCV, if your top choice doesn’t get enough votes to win, your second choice will be counted, and so on. You never have to factor in electability, never have to choose the “lesser of two evils”, and you’ll never cast a wasted vote.

Ranked choice voting gives you the power to rank candidates from your favorite to your least favorite. On Election Night, all the ballots are counted for voters’ first choices. If one candidate receives an outright majority, he or she wins. If no candidate receives a majority, the candidate with the fewest first choices is eliminated and voters who liked that candidate the best have their ballots instantly counted for their second choice. This process repeats and last-place candidates lose until one candidate reaches a majority and wins. Your vote counts for your second choice only if your first choice has been eliminated.

Ranked choice voting redefines the way we elect officials giving you the ability to list candidates on the ballot from favorite to least favorite. After all the ballots are collected, the first choices are counted. Any candidate who wins more than half the vote automatically wins BUT..

If no candidate receives that majority, then all of the voters whose first choice candidate was in last place get the 2nd choice from their ballot added to the total count. This process of removing the newest last place candidate’s vote and applying the alternative repeats itself until one candidate exceeds more than half of the total vote.

Currently, third-party candidates risk “spoiling’ elections by sapping votes away from more popular candidates--think of Ross Perot in 1992 or Ralph Nadar in 2000. In contrast, ranked choice voting allows voters to support their favored candidate without that risk. 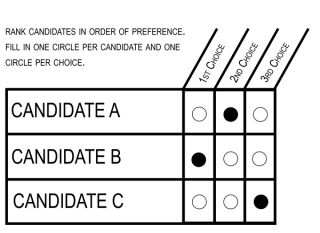 How would this work in Delaware?

Delaware’s current political system is controlled by entrenched career politicians and political machines. Because of this two-party duopoly, we are pressured to vote against our least-favorite candidates instead of voting for our favorite candidates. In contrast, ranked choice voting will allow candidates from all across the political spectrum to compete in the marketplace of ideas without fear of being a “spoiler,” which will loosen the grip of career politicians and well-funded political machines on public elections in the First State. In addition, ranked choice voting will restore civility and working across party lines to Delaware politics by pressuring candidates to appeal to many voters instead of only hardcore members of their party’s “base.”

Where else is RCV used?

This is not a novel idea. Many states, cities, and municipalities across the nation have already adopted RCV.

Delaware has a unique opportunity as a small state to make sweeping change. RCV is gaining momentum in the U.S. and it’s only a matter of time before the rest of the country follows suit. Let us be on the forefront in adopting a more equitable form of voting.